Dear Colleagues:
The Biden-Harris Administration FY2023 Budget Proposal is here and again provides substantial increases for education funding. Your voices are being heard!

On Monday the White House unveiled the complete version of the Biden- Harris Administration’s full budget proposal for FY2023 . The proposal comes just weeks after the President signed into law the $1.5 trillion FY2022 omnibus spending bill, avoiding a full year continuing resolution at the FY2021 levels.

The budget proposal calls for $88.3 billion in discretionary funding to the Department of Education- a $12.9 billion or 17% increase over the 2022 net enacted level.

In a statement , Secretary of Education Dr. Miguel Cardona said:

“Federal budgets are an expression of values. This proposal reflects the Biden-Harris Administration’s deep belief in the importance of education and the success and wellbeing of our nation’s students. It’s my hope that Congress answers the President’s call for continued investments that help our schools hire and support more teachers, school counselors, and other personnel who can nurture the social, emotional, and academic development and mental well-being of our children and youth in this critical time and beyond. Across the country, we must focus our efforts on recovery. That means ensuring all students—especially those from underserved communities and those most impacted by the pandemic—receive the resources they need to thrive. Importantly, this budget also invests in access to affordable higher education and the creation of stronger pathways that meet the demands of our workforce and connect students to well-paying jobs and fulfilling careers.”

We are told the Administration did not intend to cut any education programs, but there are what are being referred to as “artificial cuts” to 34 programs across the Department, totaling $287 million. This occurred because the Administration had intended to provide increases or level funding, but the programs received more funding in the final FY2022 omnibus than the Administration had anticipated, thus creating a discrepancy between the 2022 enacted and 20223 requests. The Department of Education does not appear to be revising its FY2023 budget to increase funding overall, meaning to at least match the FY2022 levels there will be cuts to other program recommendations across the Department. Staff from the Department will work with Congress to provide technical assistance surrounding these allocations.

The three largest programs in the Department received the three largest dollar increases: Title I by a total of $19 billion; Special Education by $3.4 billion with Part B receiving a $2.9 billion increase and IDEA Personnel Preparation receiving a $155 million (163%) increase; and Pell Grants with $3 billion in discretionary funding and an additional $6 billion in mandatory spending. 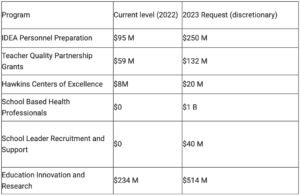 Of all the personnel shortage areas in education, the field of special education faces the most daunting shortage.  The federal program which prepares new special educators is the Personnel Preparation account, a part of IDEA. With over four decades of investment, this program has made a significant impact in delivering the workforce to carry out the promise of IDEA.  However, the shortages persist and have been exacerbated during the pandemic. States are now turning to underqualified substitutes, reducing the standards for educator credentialing, and even calling in the National Guard.

As noted in the table above, the budget recommends a $155 million increase for FY 23 in discretionary funding The Department of Education’s Budget Justification which accompanies the budget proposal describes the program and how the new funds would be used to invest in special education personnel(the budget justification is reflective of the FY2021 levels and did not take into account the $5M increase in FY2022).

For fiscal year 2023, the Administration requests $250.0 million for the Personnel Preparation program, $159.8 million more than the fiscal year 2022 annualized continuing resolution (CR) level based on the fiscal year 2021 enacted level. The request would represent the highest level of funding ever provided under the program and a historic investment in the personnel who provide critical services to support the estimated 7.9 million children with disabilities nationwide
who receive services under the IDEA. Of the request, approximately $179.9 million (including peer review costs) would be used for new projects, and $70.1 million would support the continuation of grants made in prior years.

The budget justification breaks down how the additional $179.9 million would be invested as follows:

The recommendation is again a clear indication that the Biden-Harris Administration is keenly aware of the critical shortage of special educators, including those who serve as faculty in higher education.  As we have said before, advocacy matters and your voices are being heard.

Our next step will be to work with Members of Congress to shift these proposals from recommendations to reality.

Wishing you all a joyful weekend.