Dear Colleagues,
If your head is spinning with President Biden’s massive proposals for new investments in education, you are not alone! In addition to the recently enacted American Rescue Plan Act (ARPA), two more proposals are on the table. And these are in addition to the annual appropriations process yet to unfold.  This could be a banner and historic year for education investments; but there is a long road ahead and advocacy is a must.

On Wednesday, the Biden Administration  unveiled  a $1.8 trillion spending and tax plan aimed at dramatically expanding access to education and safety-net programs for families. The American Families Plan , as the White House calls it, follows the $2.3 trillion infrastructure package – the American Jobs Plan — which President Biden introduced last month. This new addition brings his two-part package of economic proposals to just over $4 trillion. The new proposal includes a massive $731 billion investment in education and child-care funding along with other school-based investments that will benefit children. The biggest single components are $200 billion for a partnership with states to provide universal high-quality preschool for all 3- and 4-year-olds and $109 billion to provide tuition free community college, in essence adding an extra four years of free public education for all students. Education-related programs and support in the proposal include:

In a statement the White House said, “…these investments, combined with those laid out in the President’s American Jobs Plan, will boost earnings, expand employment opportunities, and enable the U.S. to win the 21st century.”  The Committee for Education Funding released the chart below highlighting the differences in appropriations for education related programs in the American Families Plan and the American Jobs Plan. The joint proposals are representative of both the Administration’s priorities and their efforts to redefine the government’s role in shaping the economy. 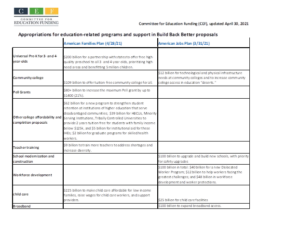 Shortly after the White House unveiled the American Families Plan, multiple national education associations  came forward in support of the plan.  Lynn Gangone, CEO of the American Association of Colleges for Teacher Education, praised the plan dedicating her association’s efforts to work with Congress to make it a reality. She said:

“AACTE has long advocated for such an investment to address growing teacher shortages, reduced enrollment in educator preparation programs, lack of diversity among teacher candidates, and the cost of college for prospective educators. Prior to the pandemic, American schools needed an estimated 100,000 additional certified teachers. Teachers without full qualifications disproportionately serve students of color and students with disabilities, posing a significant equity challenge.”

“The list of achievements are noteworthy: from shattering the 200 million vaccine goal, to getting the majority of schools reopened for safe in-person learning, to securing the landmark American Rescue Plan and proposing the companion American Jobs Plan and American Families Plan. These achievements lay the groundwork for comprehensive, sustainable efforts to rebuild our economy, make our schools and communities safe, and meet the needs of people who go to work and care for families.”

The American Council on Education praised Biden’s plan for higher education, saying it “portend[s] a revolution in the financing of higher education.” The group also said the proposals are “a vital first step” in expanding access to postsecondary education and training. The School Nutrition Association  said it welcomes the president’s proposal to expand access to free school meals.

But not everyone may be so fast to put their support behind the new investments. . House Education and Labor Committee ranking member Virginia Foxx (R-N.C.) was quick to criticize the plan during a hearing on Wednesday. “Government overreach and easy, universal access to taxpayer funds have contributed to exorbitant college tuition rates and the student debt crisis,” she said. “More money is a far cry from the sensible solution.”

In the Senate, GOP opposition to the both proposals is evident.  Objections include the $4 trillion price tag which, in large measure would be paid for by reversing President Trump’s signature tax cuts for the wealthy.  Some Republicans see the proposals as a Democratic wish list, without outreach to Republicans for bi-partisan support. “I think we’re united that the president’s package is not an infrastructure package. It’s a huge tax increase,” said Sen. Roger Wicker of Mississippi, the top Republican on the Commerce Committee.  A group of Republican Senators are working on a more modest proposal as a counter offer to the American Jobs Bill.

Senate democratic leaders are considering utilizing the reconciliation process to pass some version of each of these bills, as that process requires only a 51 vote majority rather than the usually 60 vote majority for passage.  Using reconciliation would enable Democrats to pass the bill with no Republican support – but they would need every single Democrat to sign on – a tall order given the moderate views of members like Sen. Joe Manchin (D-WVA).  The political maneuvering around both of these bills is likely to go on for some time.

On Wednesday, President Biden announced that he intends to nominate Roberto Rodriguez  for one of the top jobs at the Education Department– Assistant Secretary of Planning, Evaluation, and Policy Development . The position oversees the office that advises the secretary on all matters relating to policy development, implementation and review. The office clarifies and enforces policies on student privacy and educational technology, as well as advances STEM education in the Department and other federal agencies.

Rodríguez, now the president and CEO of nonprofit Teach Plus, was education adviser to former President Barack Obama, where he helped craft proposals to expand early education, support the adoption of college and career-ready standards in schools, and increase college access and affordability. Rodríguez “has a strong track record of shaping bipartisan policy solutions that are informed by the experiences of educators,” Secretary of Education Dr. Miguel Cardona said in a statement, adding that Rodríguez is “a fierce advocate for educational equity.”

Rodriguez’s career in public service is not limited to his efforts under the Obama Administration. Mr. Rodriguez has served in senior government roles across two presidential administrations, on the White House Domestic Policy Council, and in the U.S. Senate for the late Sen. Edward M. Kennedy (D-MA).  Rodriguez’s dedication to education began by elevating the voices of Latino families, students and educators.   I have had the good fortune of working with Roberto in all of his roles, beginning when he was a junior staffer in the Senate.  No doubt he will bring great skill, knowledge and leadership to this important role.

The Council for Exceptional Children is hosting a webinar “Thought Leaders on the American Rescue Plan Act: Guidance for State and Local Leaders”. The webinar will be held virtually on  Tuesday, May 4 from 3:00-4:30 EST.  Panelists will identify and suggest potential strategies to utilize the American Rescue Plan Act  funds to assess, design, and deliver evidence-based practices to build capacity and a sustainable system of support to attract, prepare, and retain effective special education personnel. This event is free for CEC members and you can register here.

Wishing you a glorious spring weekend,