This week marked the 32nd anniversary of the Americans with Disabilities Act (ADA). This landmark civil rights legislation represents the promise of inclusion and access for individuals with disabilities across our nation. While our country has made significant progress since the law was signed over three decades ago- there is more work to do to live up to the promise of ADA.

On Thursday, the Senate Appropriations Committee released its proposed Democratic fiscal year (FY) 2023 funding bills along with an explanatory statement and summary for each bill. The explanatory statement comes in lieu of a Committee Report and explains the intent behind the funding values and includes an overview and descriptions of each account, list of earmarks, and a programmatic funding table at the end. The Senate bills won’t be marked up, but they will serve as a starting point for negotiations in the fall.

The draft Labor-HHS-Education Senate bill is similar to the House Appropriations bill with a few exceptions:

Notable funding increases in the draft bill include: 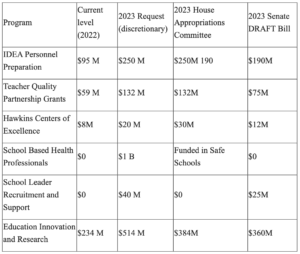 As you will notice, funding levels for key programs related to the educator workforce are lower in the Senate draft bill compared to the House Appropriations Committee bill- this is typical. The Senate generally has a lower top-line number for non-defense funding meaning across the board you will see programs take a cut. It is also important to keep in mind that these numbers are partisan, coming from Democrats. When Members of Congress return from summer recess and negotiations begin in the fall we can expect to see these numbers change. Our advocacy efforts will be critical- we must urge Members to support investments in key programs that would support the sustainability and capacity of comprehensive educator preparation programs that are so desperately needed.

2. Department of Education Prepared to Carry Out Student Loan Forgiveness for Millions of Borrowers

On Thursday, POLITICO  reported that top Department of Education officials have developed detailed plans to carry out student loan forgiveness for millions of Americans according to internal agency documents obtained by the media outlet. The documents outline how the agency would manage and operate a possible mass debt cancelation program. Department officials are reportedly prepared to provide debt relief to several million borrows for whom the agency already has income information for, within several months. Most other borrowers would apply via StudentAid.gov by self-certifying that they qualify for relief.

In a memo prepared for Secretary of Education Dr. Miguel Cardona the Department notes:

A spokesperson from the Department Education issued a statement saying:

“The Department’s review of broad based debt cancellation remains ongoing and no decisions have been made…We are not going to comment on any alleged internal documents or internal deliberations about hypothetical scenarios.”

The White House for their part said the Administration “is continuing to assess options for cancellation and no decision has been made.”

3. In the States: Military Veterans in Florida can Teach without a Bachelor’s Degree

In June, the Florida Legislature passed a bill as part of an $8.6 million package to expand career and workforce training opportunities for Veterans and their spouses. This month, the Florida Department of Education has dropped requirements  for Veterans seeking to become an educator in an effort to combat the critical shortage of educators across the state. Veterans can receive a ‘temporary’ five-year teaching certificate if they meet the following requirements:

“Florida’s new policy shortcuts the preparation necessary to teach our nation’s students and shortchanges the veteran by setting them up for failure rather than success… The United States Department of Defense would not recommend that a para-educator on Friday become an officer in the military on Monday…We can all agree that there must be standards of excellence and quality assurance in every discipline.”

The House breaks for their summer recess today and the Senate is expected to follow next week- with Democrats hopeful that their recess will come after the passage of a new reconciliation package released this week by Senator Manchin;  “The Inflation Reduction Act of 2022”.  While Washington Update typically breaks with Congress during recess you can expect to see me back in your inbox periodically throughout August reporting on education policy happenings across the states.

Until next time, take care of yourselves and each other.