There are important education developments from Congress, the White House and the Department of Education this week, as the December 3 deadline to keep the government funded looms large.

1. Appropriations Bills on the Move?

As you will recall, in July the House Appropriations Committee approved the FY 2022 Labor, Health and Human Services, Education, and Related Agencies appropriations bill . The bill included historic increases for education from the FY 2021 level – a 41% increase for the Department of Education which would bring the Department’s total budget to $102.8 billion. This week, a bit unexpectedly, Senate Appropriations Committee Chair Patrick Leahy (D-VT) released drafts of the nine remaining fiscal year (FY) 2022 Senate appropriations bills, including the Labor-HHS-Education bill. This is an unusual move, as we usually don’t see bills until they have gone through the Subcommittee markup.  These drafts have not been approved by either Subcommittees or the full committee. Rather, they are intended to be a marker to keep the process rolling.

The Senate draft appropriations bills have the same discretionary total as the President requested and as in the House bills but provide more for defense funding — meaning cuts across non-defense spending were inevitable. The Labor-HHS-Education bill  provides a 35% increase compared to the 41% increase in the President’s budget proposal and the House-passed appropriations bill. However, this does not mean that all programs took a cut, and many received increases, including 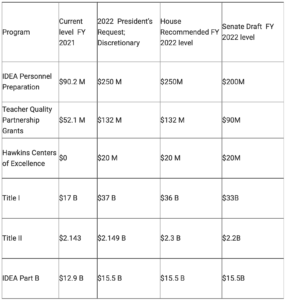 Negotiations between House and Senate appropriations leaders will now take place behind the scenes, with the goal of producing an omnibus appropriations package before December 3, when the current extension of FY 2021 funding expires.  It remains unclear if Congress will meet the December 3rd deadline or if they will need to pass another, short-term, continuing resolution to keep the government running.

This week, Rep. Wilson (D-FL), Chair of the Committee on Education and Labor Subcommittee on Higher Education and Workforce Investment, led a Dear Colleague letter to Speaker Nancy Pelosi(D-CA), Education and Labor Committee Chairman Bobby Scott(D-VA), and Budget Committee Chairman John Yarmuth(D-KY) calling for investments in the Build Back Better Act to ensure that all students have access to well-prepared and effective teachers and school leaders. Twelve other lawmakers joined Rep. Wilson on the letter , asking House leaders to fund President Biden’s educator workforce agenda outlined in the American Families Plan “to the greatest extent possible.”

“We are grateful for the inclusion of $1.1 billion in funding for key educator workforce programs in the Education and Labor Committee Print advanced in markup,” reads the letter. “We urge you to retain and build on these investments in the final Build Back Better Act to fully address the pressing challenges that school districts across the country are facing, including a lack of racial and ethnic diversity in our educator workforce and a shortage of well-trained special education teachers and well-trained educators in our nation’s highest-need schools and high-need subject areas. By funding the president’s educator workforce agenda, we can help ensure that all students experience the substantial and proven benefits associated with a diverse, well-prepared, and stable educator workforce.”

Wilson’s push comes as President Biden this week began pitching lawmakers on an outline for his revised version of the Build Back Better plan (which is the same as the Reconciliation bill at this point) –with reports now suggesting the topline number has decreased from $3.5 trillion to the range of $1.75 to $1.9 trillion. It remains unclear how the shrinking topline number will impact education programs broadly but early reports suggest that some programs once viewed as top priorities for the Administration, such as free community college, are unlikely to make it in to the final proposal. Other initiatives such as the child tax credit and a paid family leave benefit could be scaled back or eliminated completely.

Earlier this week Congressional leadership suggested they would have a deal on the framework for the budget reconciliation package by Friday with the goal of having the House vote on the proposal by the end of the month. But, on Thursday Senator Joe Manchin (D-WV)  told reporters  that was unlikely. While timelines remain unclear, one thing is certain: advocates are continuing to push to ensure that the $9 billion originally included in the American Families Plan to support teachers and address the educator pipeline is included in the reconciliation bill.

3. The White House and the Department of Education on the Move

Executive Order
This week, President Biden signed an Executive Order  on the White House Initiative on Advancing Educational Equity, Excellence, and Economic Opportunity for Black Americans . In a statement, the White House notes, “This is just the latest action taken by President Biden and Vice President Harris to tackle systemic racism and make investments to rebuild our economy and our social safety net so all people, including Black Americans, can thrive.” The order is aimed at addressing “entrenched disparities [that] continue to plague America’s education system, holding far too many Black students back from achieving their full potential.”

The White House has identified a five  pronged approach to the Executive Order by way of:

An interagency working group will be established to monitor and support the initiative by providing resources and opportunities in the federal government’s efforts to better address educational disparities.

Teachers of the Year
After a nearly two-year hiatus, educators from around the country joined First Lady Dr. Jill Biden and President Joe Biden at the White House on Monday to honor the 2020 and 2021 National Teachers of the Year. Tabatha Rospro, the 2020 honoree serves as a preschool teacher in Kansas, and Juliana Urtubey, the 2021 winner, is an elementary special education teacher in Las Vegas. The ceremony was a moment of appreciation and levity for the field during a time when many teachers say their jobs feel more challenging than ever before.

“Through uncertainty and unknowns, through a computer screen or at a distance in the classroom, teachers found new and innovative ways to connect,” Dr. Biden said. “You met students where they were. You worked long hours, you reworked those lesson plans—I swear—overnight. And you reimagined what a classroom could be. … We’re still wrestling with the challenges of this pandemic, but you and teachers like you across the country found the courage and the strength to keep going.” President Biden called teachers the “single most consequential people in the world beyond our parents.”

Student Loan Repayment
The Biden Administration is developing plans for how it will restart federal student loan payments early next year when the pandemic pause on monthly payments for tens of millions of Americans ends. Early reports suggest that The Administration is currently reviewing proposals that would give borrowers greater flexibility and more user friendly options for enrolling in various repayment plan options.

For example, officials are looking at policies to make it easier for borrowers to remain enrolled in income-based repayment programs to avoid a sudden increase in their monthly payment amount. Department officials have also instructed their loan servicers to create a “safety net” for borrowers in the first three months after their first payment is due next year.

The Department is planning direct outreach to certain “at-risk” groups of borrowers, such as those who were delinquent before the pandemic, never graduated from college or only recently began repaying their loans. And the agency has increased the call center hours of its loan servicers, anticipating a deluge of borrower requests in the coming months.

All the while, some Democrats continue to press the Biden Administration to use executive authority to cancel up to $50,000 of outstanding federal student loan debt per borrower. President Biden for his part has said he’s more comfortable with a figure closer to $10,000. The White House has said it’s still deciding whether it has the power to cancel large amounts of debt using executive action.

Mental Health Guidance
This week, the Department of Education released a 103-page resource  that addresses the social, emotional, behavioral and mental health of children and students. The document focuses on seven “key challenges” facing mental health programs in early childhood programs, K-12 schools and higher education, such as ineffective practices, policy, funding gaps and disparities among student groups, and offers a set of recommendations.  “The mental health crisis for children and youth in the United States has reached a critical point,” the document reads. “Without increasing the number of high-quality, evidence-based mental health services, the increased need for services for children and youth will not be met.”  White House Press Secretary Jen Psaki described the document on Tuesday as “the most comprehensive resource on mental health [the department] has ever published”.

This all comes as The American Academy of Pediatrics, the American Academy of Child and Adolescent Psychiatry and the Children’s Hospital Association declared a  “National State of Emergency in Children’s Mental Health” on Tuesday. The “worsening crisis” in child and adolescent mental health care is tied to stress brought on by Covid-19 and the ongoing struggle for racial justice, the groups declared in a joint statement, though it also “represents an acceleration of trends observed prior to 2020.”

Catherine Lhamon Headed to OCR
This week, Vice President Harris cast a tie-breaking vote to confirm the nomination of Catherine Lhamon to run the Education Department’s Office for Civil Rights, despite Republican opposition. Lhamon, who held the position during President Barack Obama’s second term, faced sharp partisan division as the Senate HELP Committee deadlocked over her nomination in August. Several conservative lawmakers have opposed her over her views on transgender students’ rights and the DeVos-era Title IX rule, which spells out how schools must respond to sexual misconduct reports.

“Lhamon does not believe in the presumption of innocence for students accused of sexual assault,” House Education and Labor ranking member Virginia Foxx (R-NC) wrote in a statement. “Students’ safety and rights are too important to recycle Obama-era officials who have already shown us what they will do to jeopardize both.”

While she may not have the support from many in the GOP, Lhamon does have the backing of several education and civil rights organizations and Senate HELP Chairwoman Patty Murray (D-WA). “She is extremely qualified for this role,” Murray said in floor remarks ahead of the vote. “During her past tenure, she demonstrated her commitment to students across the country as she worked to combat sexual assault on college campuses, protect transgender students, reduce the use of seclusion and restraint, reduce disparities in school discipline based on a student’s race or disability and enforce civil rights laws to protect students.”

President Biden nominated Lhamon in May. Since then she has been serving as Deputy Assistant to the President and Deputy Director of the Domestic Policy Council for Racial Justice and Equity.