As the House approaches its August recess and the Senate lumbers toward missing its August recess (Leader McConnell is holding Senators in session),  Congress  churns away amidst the ever growing and unending developments emanating from the White House.

This week the House Committee on Appropriations passed the last of the 12 appropriations bills.  The full House passed an appropriations minibus (a package of two bills – Interior and Financial Services) bringing their total to six.  We can safely say the House is half way done, having completed bills that represent two thirds of discretionary spending of the federal government!  But the two largest bills – Defense and Labor/HHS/Education wait in the wings.

On the Senate side there is talk of combining the Labor/HHS/Education appropriations bill with the Defense spending bill and bringing them to the floor as a minibus package.  This is of concern for education funding, as the Defense bill would drown out concerns that would be raised in relation to the Labor/HHS/Education spending bill.  There would be much momentum to endorse this bill as bi-partisan support for investing in defense remains high.

As we move toward the September 30 deadline for the fiscal year, pressure will increase to complete action, though most budget watchers continue to believe we will have a short term continuing resolution for Labor/HHS/Education and others to keep the government alive until after the November elections.  The drama will grow as the pressure to confirm President Trump’s nominee for Supreme Court before November will undoubtedly become intertwined with deal making on appropriations.

I had the good fortune this week to talk with one of our education funding champions – Rep. Rosa DeLauro from Connecticut’s third district. (Lucky you are if she is your Representative!)   She is a relentless advocate for all matters children and education.  (photo below) 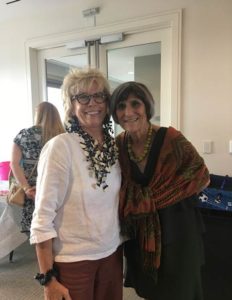 The Senate is moving to confirm the lingering nominees for political appointments at the Department of Education.  To date 11 of the 12 nominees have been confirmed.  Politico has provided a great rundown of the status of the appointees.  Highlights are below:

Still waiting in the wings for Senate confirmation is Mark Schultz to be Commissioner of the Rehabilitation Services Administration.  A nominee for the assistant secretary for postsecondary education is anticipated soon.  Note that only some political appointees must be confirmed by the Senate.  Others can simply be appointed by the President.

The Institute of Education Sciences has awarded Tulane University a $10 million five year grant to create a school choice research center.   IES indicates that the evidence on school choice programs in improving student outcomes “is mixed.”  Dubbed the National Center for Research on Education Access and Choice (REACH), the Center will examine types of school choice, including school vouchers and charter schools,  in terms of how they impact disadvantaged students.  Three dozen studies in five policy areas are anticipated – transportation, communication strategies, enrollment systems, oversight and teacher supply.   School choice programs in Louisiana, Michigan, Florida, Oregon, Denver, New Orleans, New York City and Washington, DC will be examined.    In addition, the Center will begin a National Longitudinal School Choice Database with a “15 year near-census of all traditional public, magnet, charter, private and virtual schools in the U.S. including measures of each school’s quality…and relevant state and local policies.”   One issue to be examined by the Center is the participation and impact of school choice on students with disabilities.

This week the Administration issued a new executive order creating a National Council for the American Worker which will focus on developing strategies to train workers for high demand industries.  This comes after the Council of Economic Advisors released a report called Addressing America’s Reskilling Challenge  which focuses on assisting workers in developing new skills to meet the needs of today’s economy.  Recommendations include allowing Pell Grants to be used for short term retraining programs in certain fields.

The Senate is following suit on the workforce development theme by scheduling a hearing in the HELP Committee next Thursday at 10 AM on apprenticeships.  Senate passage of the Strengthening Career and Technical Education for the 21st Century Act also appears imminent by the end of the month.   White House Advisor Ivanka Trump has been spotted on Capitol Hill numerous times promoting the legislation.

It is interesting to note that the push on workforce development by the Administration was preceded by an earlier recommendation to merge the Departments of Education and Labor.  I think we are seeing a theme here.

The House Republican version of a bill to reauthorize the Higher Education Act, the PROSPER Act – H.R. 4508 — has stood in the wings awaiting floor consideration for several months.  The Democrats will act next Tuesday to offer their version of a Higher Education Act reauthorization bill, which will stand in marked contrast to the Republican vision.  Educators anticipate the retention of key programs which are critical to addressing pressing national teacher shortages and lowered enrollment of teacher candidates in higher education preparation programs, including TEACH grants, loan forgiveness and grants to teacher prep programs, such as the Teacher Quality Partnership Grants.  The PROSPER Act eliminates these programs.  Stay tuned for more next week!

Bellwether Education Partners issued Trading Coursework for Classroom Realizing the Potential of Teacher Residencies offering the following recommendations:  Accreditation and approval processes must make space for new preparation program models and innovations within current models;  quality standards must be based in research and  residencies must hold themselves accountable for quality.

Teachers College at Columbia University published new survey results on America’s Views of Higher Education as a Public and Private Good finding that over three-quarters of respondents view public spending on higher education as a good or excellent investment.

The Urban Institute is out with a new report Kids’ Share 2018: Report on Federal Expenditures on Children through 2017 and Future Projections which reveals that the federal government will spend more on debt interest payments than on children by 2020.

Wishing you a great summer weekend!   I’m on the countdown to a long planned August vacation to Copenhagen, Stockholm and ending with the Edinburgh Art Festival where I am eagerly anticipating an incredible performance of a mime troupe!  Where are you off to?