The coronavirus outbreak has left us all a bit flummoxed this week.  Higher education, school districts and all of our communities are working to provide informed leadership, but not be alarmist – a tall order when so much is unknown.  How lucky we are to have the incredible leadership of Dr. Tony Fauci at NIH – a man I worked with over 30 years ago when I was on the staff of the first HIV/AIDS Commission.  He is a consummate public health official who is led by data and science. I know we are all tuned in.

In the last two weeks Sec. DeVos has appeared before both the House and Senate Subcommittees on Labor/HHS/Education to defend the Trump education budget proposal for FY 2021. The controversial budget calls for almost a $9 billion cut from last year, a block grant for virtually all elementary and secondary education programs and a familiar $5 billion voucher program (“Education Freedom Scholarships”).  ESSA would have to be amended in a significant manner in order to create the proposed block grant, and that is highly unlikely.  The Education Freedom Scholarships have been floated in prior budgets and have never received any traction on Capitol Hill.

Sec. DeVos repeatedly defended her budget by touting flexibility – the opportunity for state and local officials to have maximal decision making discretion with a block grant.  She was challenged by Sen. Schatz (D-HI) and Sen. Joe Manchin (D-WVA) who argued that more decision making authority with so much less money is hardly a win for state and local districts.  No Republicans on either subcommittee expressed support for the budget overall.  The one big increase – $762 million for career and technical education — was supported by many subcommittee members.

Sen. Blunt (R-MO) told Sec. DeVos that her block grant proposal belonged before the HELP Committee, not the appropriations committee.  “We’re going to write the FY2021 appropriations bill under current law,” he said.  He also challenged her lack of communication with subcommittee leadership as she quickly reversed her position on a funding formula for rural schools while leading Sen. Blunt to believe it could not be changed.

Sen. Lamar Alexander (R-TN), Chair of the Senate HELP Committee, and Sen. Patty Murray (D-WA), ranking member on the HELP Committee, have issued somewhat dueling statements about the likelihood of a long-awaited bipartisan deal on a Higher Education Act reauthorization bill.  Sen. Alexander said he hopes to have a bipartisan bill passed by the HELP Committee by the end of March (yikes, that’s three weeks away!) The goal would be to give the Senate time to pass a bill that could be signed into law by President Trump before the end of the year.

A major hurdle continues to be Title IX, which addresses how institutions deal with sexual assault and harassment allegations.   Sec. DeVos is poised to issue regulations on Title IX before the end of March – regulations which will likely require that those who are accused be able to cross-examine accusers – something Sen. Murray strongly opposes.

Sen. Alexander retires at the end of the year and he is motivated to accomplish this reauthorization as a finale to his years of Senate service.  Sen. Murray will be dealing with a different Republican leader next year; Sen. Richard Burr (R-NC) is in line to take Alexander’s spot.  Whether or not she would have a better shot at negotiating with a new Republican leader is hard to know.

In the House, the College Affordability Act — the Democratic HEA reauthorization bill — awaits floor time and a determination of how to pay the $332 billion price tag.  HEA has not been reauthorized since 2008!

3. Bernie V. Joe:  Where do They Stand on Education?

As the field of Democratic presidential candidates consolidates around VP Joe Biden and Sen. Bernie Sanders (I-VT), educators are increasingly scrutinizing their plans for education.  Below are a few highlights of the education plans of the two candidates to date.  Note that they are evolving and that the highly coveted endorsements of the teachers’ unions — AFT and NEA — have not yet occurred. 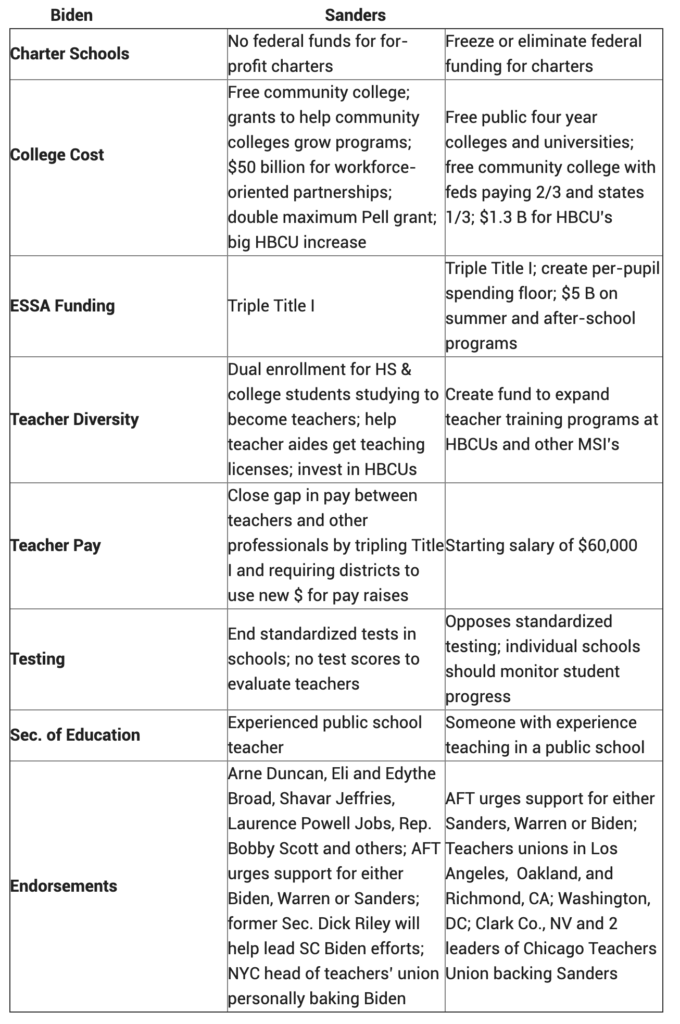 The National Center on Education and the Economy features an article in its newsletter Are millennials attracted to teaching careers? See: http://ncee.org/2020/03/are-millennials-attracted-to-teaching-careers/

The Brown Center at the Brookings Institution is out with an interesting analysis Are America’s rising high school graduation rates real – or just an accountability fueled mirage? See: https://www.brookings.edu/blog/brown-center-chalkboard/2020/03/02/are-americas-rising-high-school-graduation-rates-real-or-just-an-accountability-fueled-mirage/

The Office of Special Education of the U.S. Department of Education is holding a live streamed event at the National Press Club on March 19 from 1-5 ET titled Attract, Prepare, Retain: OSEP National Summit on Improving Effective Personnel for Children with Disabilities.  See: https://osepideasthatwork.org/federal-resources-stakeholders/attract-prepare-retain-osep-national-summit-improving-effective-personnel-children-disabilities

Wash those hands and be well!