We will have our full-throated Washington Update for you next Friday, but we wanted to provide an interim update on the big development in the House this week – the Committee on Education and Labor’s markup of the long-awaited Reconciliation bill – which features significant investments in the educator workforce.   Read on!

As you will recall, several months ago President Biden proposed two significant investments in the nation’s infrastructure – both human and physical: the American Jobs Plan and the American Families Plan. The human infrastructure component is now being developed by Congress, in the form of a reconciliation bill.  Yesterday, the House Education and Labor Committee began to mark up its portion of the reconciliation proposal. The 289 page proposal, with a $761 billion price tag — otherwise known as the Build Back Better Act — is part of the larger $3.5 trillion proposal.

As described by the Committee, the proposal would lower costs for families, secure good-paying jobs for American workers, and set a strong foundation of America’s children. The three major education programs in the bill include Universal Pre-K, Tuition-Free Community College, and Child Care.

As expected, based on the amount the Committee was allocated to spend, the education investments are less than what President Biden proposed.  Notably, the $9 billion investment in the educator workforce that President Biden proposed was cut back to roughly $1.1billion. Key programs such as the TEACH grants and Credentialing are not included as part of the House proposal.  The chart below was developed by the Learning Policy Institute.  It compares the House proposal to the Biden proposal for the educator workforce. 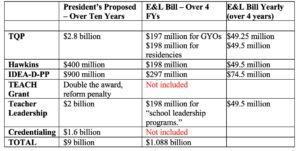 It is worth noting that while all of the allocations in the House bill for educator development are significantly lower than the Biden proposal, they also span only 4 years – whereas the Biden plan spans 10 years.  For example, although the $297 million allocation for IDEA Part D for Personnel Preparation is $603 million less than the President’s $900 million request, it represents a $74.5 million per year allocation rather than the $90 million per year allocation which the President proposed.  Thus, on  a per year basis, the House bill would provide for 18% less per year than the President’s proposal for IDEA Personnel Preparation.

Rep. Bobby Scott (D-VA.), the chair of the House Committee on Education and Labor, said that the bill would make “historic investments that will lower costs for nearly every family, create good-paying jobs for American workers and provide our nation’s children the strong foundation they deserve.” But not everyone on the Committee believes the proposal is in the best interest of the American people.  Rep. Virginia Foxx (NC), the top Republican on the Committee, criticized Democrats’ proposal as an “irresponsible spending scheme that will double down on the inflation crisis and allow the federal government to infringe on Americans’ liberties.”

Some key additional education programs included in the bill are noted below.

The Committee will continue the markup of its portion of the $3.5 trillion Build Back Better Act today, taking votes on about 40 amendments and ultimately passing the bill out of Committee with only the support of Democrats.  The next step will be for the bill to become part of a broader $3.5 trillion reconciliation package that will be voted on by the entire House.  The Senate will also have to act, and that timetable is not yet clear.

Stay tuned for more information and opportunities to advocate for this historic investment in the educator workforce.

Have a wonderful weekend.