Congress returns on Monday, after a long August recess, where they will face a full agenda and a demanding timeline with significant education funding at stake.

1. Members of Congress are in a Race Against the Clock with Critical Deadlines Looming this Fall

Members of Congress are in a race against the clock to get four major pieces of legislation passed and ultimately to keep the government running. The big four are: the bi-partisan infrastructure bill, the reconciliation bill, a continuing resolution to avoid a government shutdown, and legislation to raise the debt ceiling to avoid the government from heading into default on its obligations.

The first bill, the bi-partisan infrastructure bill, passed the Senate before the August recess.  It is now up to the House to act.  However, the bill’s progress is tied to the fate of the second bill — reconciliation (which is a Democrat only initiative) – which is described further below.  House Speaker Nancy Pelosi (D-CA) promised Democrats that she will hold a vote on the Senate-passed bipartisan infrastructure bill by September 27th.  She also pledged to approve the partisan reconciliation bill — a $3.5 trillion plan for social programs (including education) — in conjunction with the bi-partisan infrastructure bill. By tying those two bills together she is hoping to keep her caucus on the same page, with both moderates and liberals supporting them both.

However, that ambitious goal and politically fraught challenge is running up against complex negotiations on the reconciliation package that are underway between the House, the Senate and the White House.  There is a strong desire to “pre-conference the massive bill” before either the House or the Senate pass it.  This “pre-conferencing” would mean that both chambers would agree on the contents of the bill in advance, and thus avoid drawn-out fights on amendments in one chamber, which may go on to fail in another chamber.  There is little wiggle room in this endeavor, as in order to pass the bill it must win the support of nearly every Democrat in Congress. The House can afford to lose only three Democrats and the Senate must corral every one of its 50 Democrats.  Disagreement over the overall cost of the bill has become significant, as the House and the White House are pursing $3.5 trillion and moderate Senate Democrats (notably Sen. Joe Manchin (D-WV) and Krysten Sinema (D-AZ)) are holding out for less – perhaps $1.5 trillion.

The third bill – a Continuing Resolution — must be passed by both chambers before September 30, when all current government funding runs out. Congress has virtually given up on trying to pass the FY 22 funding bill in time, as the Senate has not yet begun to mark up its bills at the Committee level.  In order to avoid a government shutdown Congress needs to pass this temporary extension of funding, which will likely hold things together for a few months while work on the FY 22 funding bills continues. The passage of these short-term continuing resolutions has become more the rule than the exception in recent years.

Finally, the Congress needs to raise the debt ceiling.  The United States is expected to reach its limit in the coming weeks and without an increase in the debt ceiling, the government could default on its financial obligations. This too is politically challenging, as Republicans have said they will not support an effort to increase the debt ceiling unless spending cuts are on the table.  Democrats are deciding how to proceed in order to avoid a calamity on their watch.

Education advocates are keeping a close eye on all four of these trains moving down the tracks hoping they will all reach the station on time, and without a collision!

The reconciliation bill, described above, has moved through a first step for education – a markup in the House Education and Labor Committee.  The $761 billion  bill  is the Committee’s portion of the Build Back Better Act, which was originally proposed by President Biden as a human infrastructure initiative.  Multiple House Committees have completed their mark ups of their portions of the bill.  The next step is for the House Budget Committee to package them into one large $3.5 trillion reconciliation bill and send it to the Rules Committee. It may take weeks, if not months, before we see a new version of the bill, as the House may wait for the Senate to pass the bill before proceeding with their final vote.

As noted above, high level negotiations are underway to “pre-conference” a bill that would pass in both chambers. Agreeing on a top line dollar figure will be one of the toughest compromises.  If the $3.5 trillion figure is trimmed down, as is most likely, programs which are funded in the House version of the bill will be cut. Education investments, along with others, are at risk. No Republican is expected to vote for the reconciliation package in either chamber.

Earlier this week, President Biden met separately with  Sen. Manchin and  Sen. Sinema who have publicly and repeatedly balked at the $3.5 trillion spending level. Manchin reportedly favors a bill that costs up to $1.5 trillion, less than half of the current spending level proposed by the House. This type of reduction would ultimately lead to massive cuts in proposed spending levels for many programs and the elimination of others. Sen. Sanders (D-VT), Chair of the Senate Budget Committee, said Sunday that Manchin’s price tag is “absolutely not acceptable to me” or Biden. When asked about Sanders’ insistence that the bill will cost $3.5 trillion, Manchin told reporters, “God bless him is all I can say.”

Below is a chart outlining the education workforce investments in the House Committee bill compared to the requests made by President Biden.  While the President recommended $9 billion for these programs, the House bill includes $1.1 billion.  While education advocates are pleased to see the $1.1 billion, they will continue to push for more.  However, the path forward is filled with land mines as noted above.  Stay tuned for more advocacy work!  At a minimum, educators do not want to lose the investment in the House bill if the overall dollar figure is reduced from $ 3.5 trillion. 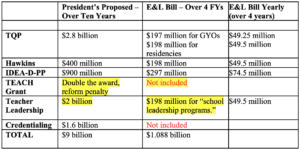 Sen. Elizabeth Warren (D-MA) held up Kvaal’s nomination for months as she negotiated with the Biden Administration over changes she said she wants to see for how the department manages its student loan portfolio. Warren lifted her hold on the nomination just before the August recess, citing “substantial reforms” to the federal student loan program that she said the Administration had vowed to make.

In a statement, Secretary of Education Dr. Miguel Cardona praised the confirmation of Kvaal, highlighting the critical importance of the role of the Under Secretary.

“James Kvaal, the nation’s new Under Secretary of Education, has a deep understanding of the strengths, needs, and challenges in postsecondary education. This is critical at a time when increasing college access, affordability, and completion is key to helping America build back better. With this confirmation, the Biden Administration and the American people gain a dedicated and distinguished public servant with strong expertise in higher education who will always put students first.  James previously served as the president of the Institute for College Access and Success, where his work on higher education included initiatives to make college tuition more affordable, protect students from unaffordable loans, and help many more students graduate from college. Over the course of his career, he also has served in senior roles at the White House, the U.S. House of Representatives, the U.S. Senate, and here at the U.S. Department of Education. James recognizes the life-changing power of higher education, and I am delighted to welcome him to the agency.”

Kvaal previously was a top education adviser in the Obama White House and more recently led The Institute for College Access and Success.

Also this week, President Biden announced his intent to appoint Dr. Tony Allen as the Chair of the President’s Board of Advisors on Historically Black Colleges and Universities (HBCUs). Allen, who has known Biden and his family for more than 25 years, comes from the only HBCU in the President’s home state. He will lead a board of up to 21 members and advise the Administration on how to fund the institutions and build partnerships between the colleges and universities and federal agencies, The Board will also advance the goal of the HBCU Initiative, established by the Carter Administration, to increase the capacity of HBCUs to provide the highest-quality education to its students and continue serving as engines of opportunity.

Education Week reports on threats received by school district leadership across the country in response to Covid-19 mitigation efforts. This comes as many students across the country return to in-person learning for the first time since the start of the pandemic.

The New York Times reports on the dire workforce shortage across the education continuum- including educators, bus drivers, cafeteria workers, and substitutes. Districts are now faced with insurmountable challenges just as many students return to in-person learning for the first time since the start of the pandemic.

Wishing you a wonderful weekend.